Jumping Jacks and plenty of smiles to share on Red Nose Day!

Share a smile, have some fun and enjoy the power of funny!

This year’s Comic Relief provided a chance for pupils at Dashwood to spend a day laughing with school friends they have not seen in months.

Two weeks have passed since schools reopened to students under the Government’s easing of lockdown restrictions bringing to an end enforced home schooling.

For staff, this year’s Red Nose Day has come at the right time as an opportunity not just to raise money for those in need but also to boost the mental wellbeing of their pupils. Many have only been back in classrooms for ten days and enjoyed Sharing A Smile – the theme for Comic Relief 2021.

Whether children were wearing themed accessories, taking part in the Jumping Jacks challenge or passing a smile along in the Red Nose picture, fun was the order of the day at Dashwood. 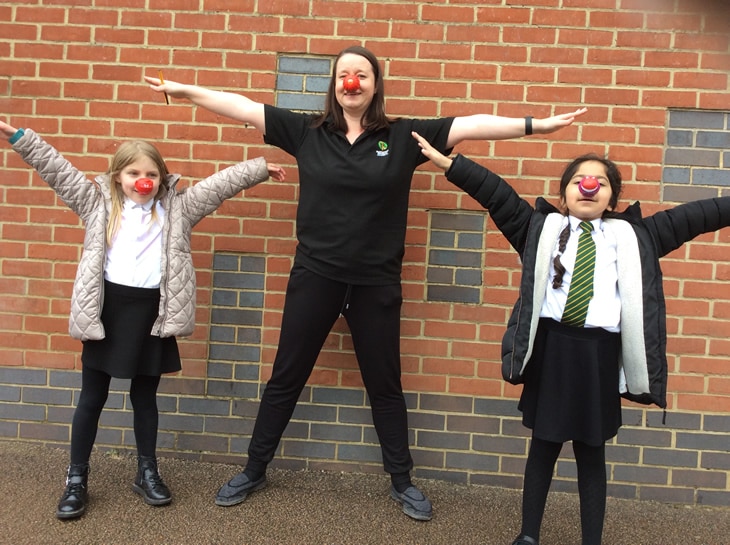 Principal, Amy Rogers, greeted her young pupils at the school gates with balloons and red noses. Children and staff performed Jumping Jacks during break times to help them keep active, with 12,401 completed – the equivalent of 17.2 miles!

Mrs Rogers said: ‘’Our Jumping Jack challenge was performed in groups and was a chance to have some fun as a whole school, provide a sense of belonging and raise some money by being active.

‘’This year’s Red Nose Day is so close in timing to the children returning to school it has provided a welcome opportunity to boost the mental wellbeing of our students. The children have really enjoyed being together and doing something that makes them happy.’’

Nurturing the mental wellbeing of pupils is a key aim of the school. It’s this that has led us to be a partner schools of mental health charity Place2Be, which has the Duchess of Cambridge as its patron.

A working party was set up between Place2Be, Dashwood and Harriers last year, with the charity helping the schools by highlighting strategies and methods proven to help children feel calm in classrooms.

Almost £420 was raised for the charity in donations. Thank you all who gave so generously.

We had a great dress up day for our 120 year anniversary celebrations; the pupils and staff looked amazing in their period costumes! Classes were…